"Its one day versus the rest of our lives" 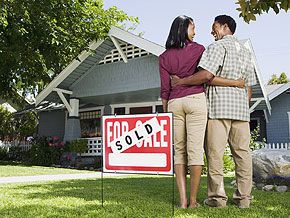 •Two out of three First Time Buyers say getting on the property ladder is more  important than getting married.

Helina McBride (24) is currently studying for a degree in Occupational Therapy and Sean Clarke (29) works in HR for the Ministry of Defence.  The couple have recently bought their first home in Stoke Gifford near Bristol.   They had to make the choice between getting married or getting their foot on the first rung of the property ladder…

Helina and Sean were introduced via mutual friends when they both lived in Plymouth, and have been together for three years.  Two years ago, the couple moved to Bristol and initially, lived in privately rented accommodation.  However, after 12 months, they decided that the money they were spending each month on rent might be better used to pay a mortgage.

The couple talked openly about their future aspirations, and fortunately agreed that their priorities were the same, i.e. to buy a home together, get married and have children.  However, as the couple wanted to buy in or around Bristol, which has seen property prices increase rapidly over the last few years, they realised that given the expense of a wedding and the costs of buying a property, they would have to prioritise one over the other.

As Helina explains, “Much as we both want to get married, when we looked at the amount of money we were spending each month on rent, it made more sense to us to buy a property first, then save for a wedding after that. To us, buying a house together is both an investment in our future as well as a commitment to each other, and we felt that buying our first property was a better use of our money at the moment as it’s an investment in the rest of our lives, rather than spend all of that money on effectively, one day, which however lovely, is just a big party.”

Having taken advice from Mortgage Advice Bureau, the couple decided to investigate purchasing via one of the Help to Buy schemes, and identified a two-bedroom terraced property in Stoke Gifford, which they thought would be perfect as their first property.   As well as their own savings, the couple were helped by their families to raise the funds for their deposit, legal fees and moving costs.  Helina and Sean moved into their new home in December 2016, just in time to celebrate Christmas in their new pad.

Thinking about their future wedding plans, Helina says, “Whilst it would be great to have a big family wedding with a marquee and all the trimmings, we would be very happy with a smaller, intimate celebration.  That doesn’t mean we love each other any less, it’s just that we don’t need to make a big fuss to get married.  We’ve got a dedicated savings account for our ‘wedding fund’ that we add to every month, and we’d ideally like to get married within the next two years.  Sean and I agree that we don’t want a long engagement, although having said that, it doesn’t get Sean off the hook and I’d still like him to propose properly at some point and go down on one knee!”

Helina continues, “It will be great being Mrs Clarke when the time comes but for us, as we couldn’t afford a house and a wedding at the same time, we decided that this was the right way round for us.  These days, getting a joint mortgage and buying a home together is as much of a commitment as getting married anyway.  Whilst it would be lovely to be engaged, for now the money has been better put towards buying our first home together, rather than a diamond engagement ring for me.”